The art of using a 1-lead device (or 2-electrode device) to record all 12 ECG leads is actually not new. In 2008, Dr. Grier at NDSU outlined the framework for doing this with handheld devices, far before smart watches even hit the market! However, unlike those 15 year old devices and even new home ECG readers (e.g., Kardia’s products), Apple Watches offer a ubiquity that makes them very interesting for this purpose if chest pain strikes in a location with delayed healthcare access (skiing, hiking, airplane rides).

Leads I, II, and III can be easily measured on the Apple Watch. The watch uses its back crystal as the positive electrode and the crown as the negative electrode. Below is a sketch of how Lead I can be measured. Leads II and II can be similarly measured.

The augmented leads are a bit more complicated. Unlike the other leads which are largely just the potential difference between two different points on our body, the augmented leads are calculated. Their calculation averages two locations and then uses the actual potential from another location – the same professor mentioned above, Dr. Grier, has a very nice graphic that explains it better than I can: 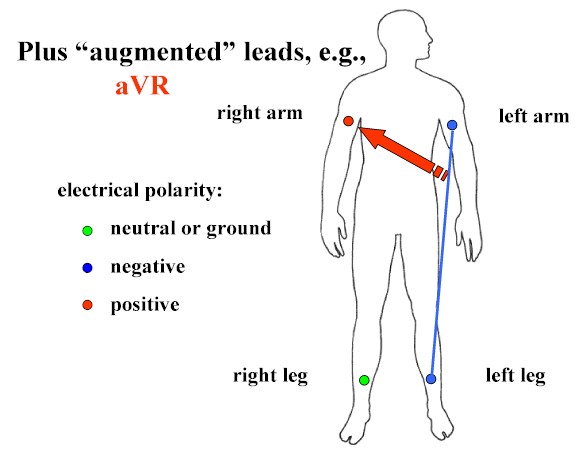 Measuring these leads would thus involve using a wire to connect different body parts (e.g., left arm and left leg), then holding that to the watch, while the other part (e.g., right arm) completes the circuit on the watch. I did not have wire handy and also wanted to simulate a situation where someone could be in a remote or inaccessible location (e.g., skiing, on a plane, etc.) where an Apple Watch is the only tool they have.

In ECGs, leads I-III have easy to understand measurements, as there is a positive and negative electrode, and the difference in potential between them is measured. The precordial leads (V1-V6) overly the chest wall at 6 different positions, however they don’t have a clearly apparent second electrode. There is no actual second electrode, but instead a theoretical position deep in the chest (under the heart) known as Wilson’s Central Terminal to which the precordial leads are compared. That theoretical point obviously doesn’t have a lead placed on it (that sounds painful!) but is approximated by averaging all the limb leads and treating that potential as the reference to which the precordial leads are compared against. The details and derivation of this are discussed in detail in section 15.3 of this text.

In summary, Wilson’s Central Terminal cannot be approximated on an Apple Watch without connecting all of your limbs with copper wires and then connecting that to one of the Apple Watch electrodes. This is unwieldy and defeats the purpose of a portable, wearable ECG. However, there are means to approximate it which are effective. I found two approaches in the literature to this approximation:

For my own measurements, I was intrigued by the second approach, so I performed it by their methodology as follows:

I would suggest following an image like this one if you plan to replicate this yourself.

Below is the monstrosity I spent the last 30 minutes recording, outputting as 9 separate PDFs, then stitching together in Photoshop. Of note, these are not simultaneous readings from each lead, but 9 discrete intervals recorded individually.

Brief overview of how this 9-lead ECG does and doesn’t provide more information than a 1-lead ECG:

Academics who have published on this topic have published interesting results such as using actual STEMI patients, comparing the Watch ECGs to professionally performed ones, as well as having actual cardiologists perform blind reads of ECGs to assess sensitivity and specificity. The results have consistently shown that the Apple Watch, while unwieldy, can perform largely accurate ECGs.

An undergraduate student’s December 2020 review article on this topic, “Einthoven and precordial lead accuracy of smartwatch-acquired electrocardiographs: a review of the literature”, can be found here. It is a great discussion of the underlying electrophysiology, successes, and limitations of this topic.

I think the most interesting cases are taking actual STEMI patients and seeing how accurately the Apple Watch could measure them. Out of Italy, this 2020 JAMA Cardiology article used Series 4 Apple Watch ECGs to record 100 patients (54 STEMIs, 27 NSTEMIs, 19 controls). In their supplemental materials, they included a comparison of a STEMI as perceived by the Apple Watch vs. their standard ECG equipment:

I think there is true utility to these, but only in very specific scenarios where access to medicine is forcibly delayed. If transit to a hospital is possible, then precious door-to-balloon time would be wasted as you place an Apple Watch in various spots over your bare chest. However, situations that come to mind are remote recreation (skiing, hiking), airplane travel, and catastrophe, where most owners of Apple Watches would be expected to have them on-hand, and there is a forced delay until emergency personnel can get you to a hospital / cath lab.

The natural follow up question to this is whether or not this hyper-early detection (not only pre-ED but pre-ambulance!) would actually change outcomes. I’m not sure I’m qualified to answer that. The impact of early ECGs on STEMI care has been explored in several studies, however those have been more directed at whether or not having paramedics perform ECGs pre-hospital will improve outcomes.

This article was last updated on August 22nd, 2022, and I will add to it as I make better graphics and receive access to some articles I am waiting on.